After marriage I had three or four miscarriages

After marriage I had three or four miscarriages. When I found myself pregnant again, I asked a Christian Science practitioner to work prayerfully with me to gain a spiritual concept of childbirth, to realize that God alone is truly the creator of man, sustaining His idea. One evening five months later I was entertaining a relative who was not a Scientist. I felt contractions start and continue coming about every ten minutes. I did not mention this. We visited for two more hours. I recalled the intense fear I had felt previous times when premature contractions had begun, but this time I was calm, quiet, and at peace.

When I was alone, I called the practitioner immediately, and her treatment was instantly effective. There was not one more contraction. I carried the baby to full term and had a harmonious delivery. Two more children were born later, and each was carried easily and normally.

Send a comment to the editors
NEXT IN THIS ISSUE
Testimony of Healing
"Come and hear, all ye that fear God, and I will declare what... 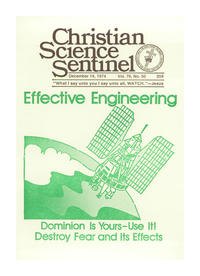