A lifelong Christian Scientist, Mr. Bole received a Master's Degree in History and an Education Diploma from Cambridge University in England. He had class instruction in Christian Science in 1951 and served on the staff of The Principia in various capacities, including that of vice-president. Mr. Bole also served as Manager, Executive Department of The Mother Church. In December of 1970 he resigned from the latter post to devote himself entirely to the public practice of Christian Science.

Send a comment to the editors
NEXT IN THIS ISSUE
Testimony of Healing
When I came to myself some fifteen years ago in a state mental... 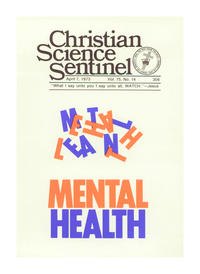