It was very late that Saturday night when the two white teen-age boys suddenly realized that they weren't on the street where they'd left the car earlier in the day; they were in New York City's Harlem area.

They'd driven in from the suburbs that morning, left the car at an uptown garage and taken the subway downtown to buy records and things like that. Somehow on the way back they'd gotten off at the wrong subway stop. That was the summer when many of our big cities experienced rioting in the black ghettos.

Send a comment to the editors
NEXT IN THIS ISSUE
Article
"Daddy, why...?" 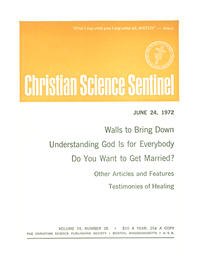