It is evident that human thought has more than one source. If thoughts all came from the one Mind, God, they would all be in harmony. But human consciousness includes many thoughts that clash with other thoughts. The general belief in matter says that this is the natural result of a natural fact—that thoughts originate in the brain and there are many brains, hence many minds. Christian Science insists that the brain cannot originate thoughts because the brain is merely a part of the general belief, which is false. In Christian Science we name this belief mortal mind.'

There's no explanation for the existence of a mind other than the one divine Mind, for there really isn't such a mind. But the evidence of the existence of a mortal mind seems very real. In fact, this false, mortal mind seems to influence human thought most of the time. We see this influence in mankind's concern with material things. And we see it in human behavior that expresses the mortal mind influence—in selfishness, hatred, prejudice, crime, violence, and so on. We see it also in disease. 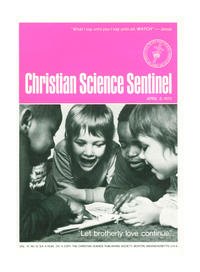