Christian Science was brought into our home by an aunt who...

Christian Science was brought into our home by an aunt who was healed of a nervous condition. My grandmother readily accepted it, but my mother resisted it because she was rather antagonistic toward it at first. However, when Mother was faced with surgery, she turned instead to Christian Science and was healed.

At about this same time, while visiting my aunt in another city, I received an instantaneous healing of an undiagnosed condition of severe pains in the back of the head and neck. This healing made such an impression upon my thought that in later years, when I was tempted to doubt or fall away from the teachings of Christian Science, memory of this healing convinced me of its efficacy.

Send a comment to the editors
NEXT IN THIS ISSUE
Testimony of Healing
Christian Science came to me through my husband, who brought... 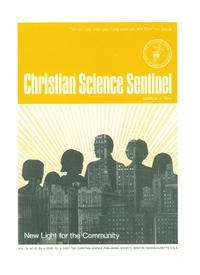