The Importance of Knowing God

A recent survey conducted in one of the major American cities shows that 98 percent of its varied population believes in God—2 percent more than thirteen years before when the same questions were asked.

In a modest way this fact was confirmed by two high school pupils who undertook a private survey in a supermarket in another city, asking shoppers the question, "Do you believe in God?" Some of the replies appear at the beginning of this Sentinel, and indicate that by far the majority of the people we meet as we go about our daily business do have some awareness of a supreme divine power or intelligence, which they believe creates the universe and is concerned to care for it and for the men and women who are its inhabitants. 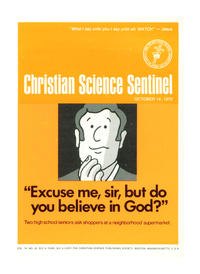