Leaving England to emigrate to Canada was the conclusion of...

Leaving England to emigrate to Canada was the conclusion of an almost yearlong compulsion to do so. But I had no idea why. Prior to this, I had seldom been far from home. In October, 1964, I found myself in Toronto, nearly three thousand miles from home, looking for work and having been assured that there would be no difficulty in finding it. But as the hours passed into days, it became obvious that finding employment wasn't going to be so easy; in fact, after some five weeks it appeared impossible.

Despair and self-pity were beginning to creep in as I unwillingly dragged myself around the city in the bitter cold weather. Drinking and smoking were long-standing habits that were helping to dissipate what little money I had. With nothing coming in, winter rapidly descending, Christmas fast approaching, expenses mounting, my whole situation seemed impossible. The days were black, the nights sleepless, and now desperation was gripping me. 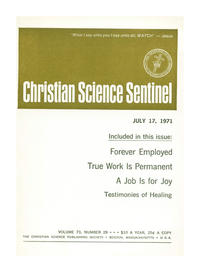