My gratitude for the direction, protection, healing, and progress...

My gratitude for the direction, protection, healing, and progress that Christian Science has brought into my life is boundless. The study and application of Christian Science has been an integral part of my life since this teaching was introduced to me by my grandmother. After comparing it to other religions, which had been presented to me previously, I found Christian Science to be the most applicable and beneficial.

After much prayerful study I was led to move far away from my home and parents to pursue my career. Without this study to know God's guidance and presence with me, I would never have had the courage to make this move alone from a very small town to our nation's largest city. I was divinely led to a roommate who studies Christian Science, a branch church nearby, and a teacher who helped me on the first steps in my career who was also a student of Science. I progressed much further than I thought I would in my career and made many dear friends along the way. 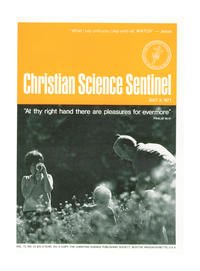