Last year when I was walking down a road with my friend...

Last year when I was walking down a road with my friend from school, a teen-age boy riding a ten-speed bicycle hit me at great speed and threw me some distance. My mother and others witnessed this accident and later told me what had happened, as I was only semiconscious for several hours afterward. My mother called for treatment from a Christian Science practitioner. It was obvious that I had bodily injuries, as well as a brain concussion.

My parents prayed for me in Christian Science and kept in touch with the practitioner until I was fully conscious. It took a while before I could remember things, but by the middle of the night of the same day I was completely healed of all the symptoms of the brain concussion.

Send a comment to the editors
NEXT IN THIS ISSUE
Testimony of Healing
After writing a testimony, which appeared in the May 1, 1965,... 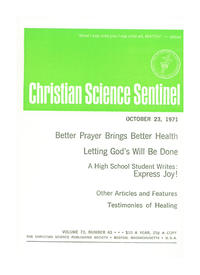