The account in I Kings, Chapter 19, of Elijah on Horeb, the mount of God, has always intrigued the writer. At Carmel Elijah had shown the people the power of God as opposed to the power of Baal, when fire had come down to his offering but not to that of the prophets of Baal. He had had a glimpse of the power of the Christ, Truth. This should have made him feel on top of the world.

Yet, very soon after, he was fleeing for his life and saying, "Take away my life; for I am not better than my fathers." I Kings 19:4; The writer has concluded that Elijah had, in part, been waging a personal war on Jezebel and the prophets of Baal, seeking revenge for the atrocities to the prophets of God, of which he thought he was the sole survivor. Having prayed for God's help and having been shown the power of God, he was not satisfied but, full of revenge instead of forgiveness, proceeded to slaughter the prophets of Baal. Elijah needed to understand that God is not only a mighty God but a loving God. 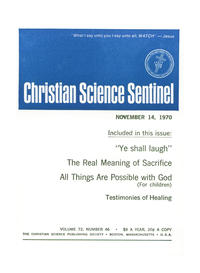