Christian Science has been in my home since my marriage, but I...

Robert B. Lundy with contributions from Marie Lundy

Christian Science has been in my home since my marriage, but I gave it little thought until about six years ago when a cancerous condition appeared on my lip. I tried various material remedies recommended by loving and well-meaning friends and relatives, but the condition steadily grew worse. As it was both inside and outside the lip, the condition made eating quite difficult. As it became more menacing, I felt "this is it." I knew I must make a decision soon, or I would surely be in trouble.

My wife had experienced several healings in Christian Science, and I decided this was my only hope. So I turned to Christian Science for healing, and treatment through prayer was taken up. I practically withdrew from all outside activities, began attending church regularly, and spent most of my time in earnest study of the Bible, the weekly Lesson-Sermon in the Christian Science Quarterly, and the writings of Mrs. Eddy. My wife and I endeavored to search out any shortcomings, past or present, and then set about to make proper adjustments in order to bring our thinking and actions into conformity with God's law of justice and right. We had purchased some merchandise some time before, and through a mix-up in bookkeeping we were never presented a bill for it. We had asked them to check their files to straighten it out but received no answer to our letter, so the matter was dropped for the time being. In the course of our prayerful metaphysical work this situation came to our thought. We went to the manager of the store, explained to him what had happened, and paid the bill. Whatever we found lurking in consciousness that needed correction, we proceeded to make right and to destroy what was unlike God.

Send a comment to the editors
NEXT IN THIS ISSUE
Testimony of Healing
I am writing this with love and gratitude to God for Christ Jesus... 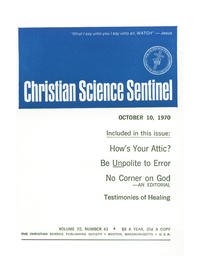