In the Bible and Science and Health by Mrs. Eddy, the Christian Science...

In the Bible and Science and Health by Mrs. Eddy, the Christian Science textbooks, I found the help that sustained and healed me of a broken arm in a period of a few days. When the injury occurred I immediately acknowledged that I "live, and move, and have [my] being" in God (Acts 17:28). I reasoned that I could be brought into no condition or belief of accident that could separate me from God but could only be knit closer to Him.

Four words Mrs. Eddy applies to man came readily to my thought—"unfallen, upright, pure, and free." The full statement in Science and Health is on page 171, "Through discernment of the spiritual opposite of materiality, even the way through Christ, Truth, man will reopen with the key of divine Science the gates of Paradise which human beliefs have closed, and will find himself unfallen, upright, pure, and free, not needing to consult almanacs for the probabilities either of his life or of the weather, not needing to study brainology to learn how much of a man he is."

Send a comment to the editors
NEXT IN THIS ISSUE
Testimony of Healing
Were I to attempt to catalog all the blessings and healings I have... 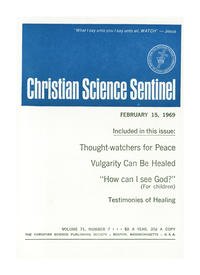