Some years ago a light passenger steamer made frequent excursion trips from its home port on the north shore of Lake Ontario down the River St. Lawrence to the scenic Thousand Islands, In the operation of this ship the duties of the crew usually were routine, but at times a most unusual duty became imperative. Whenever too many passengers on the upper deck moved to one side or the other, the ship's list would be excessive, if uncorrected. But two of the crew rolled some barrels of wet sand across the main deck. A long pendulum suspended in the center of the ship indicated when balance was restored for the time being. Evidently in this ship's design and construction its equilibrium for all possible loadings had not been fully considered.

The inherent instability of this ship was adjusted as occasion required on the sole basis of effect, a procedure that could not correct the underlying error in design. Somewhat similarly, unbalanced human relations, whether personal, national, or international, cannot be improved permanently without considering underlying cause, since the thoughts that produce the imbalances must be superseded by a higher level of moral integrity and spiritual understanding. 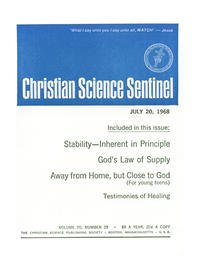