"No mere theory, doctrine, or belief"

Christ Jesus practiced as he preached, proving the truth of his words by his works. To him there was no incurable disease, no uncontrollable fear, no inevitable death. He exposed the impotence, the utter nothingness, of evil in its most aggressive forms, not just once but many times. And today, true to his promise that his followers would be able to perpetuate his works, Christian Scientists the world over are proving the presence and power of the Christ. 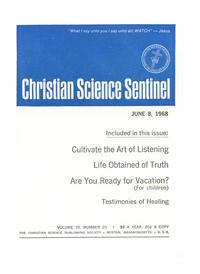