The heavy fog chilling the pasture and the mysterious clanking of cowbells seemed as unfriendly to the little visitor from the city as the stubble that hurt his bare feet. The first glimmer of dawn was penetrating the darkness, but even that was frightening. It outlined ominous, gray forms. To his active imagination they appeared to have a menacing purpose and power.

Soon he was to learn that right where the grotesque forms appeared in the mist, there stood the barn, the silo, and pieces of farm equipment. After the sun had melted the fog, he would see these objects as they were. He would play happily in the very same place that terrified him now. He would get to know the barn, ride the machines, and love them all. 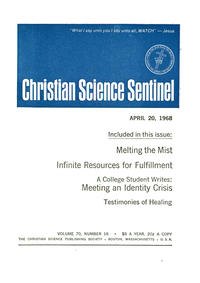