The Unifier of Men and Nations

For centuries peoples and nations have been engaged in dubious diplomacies and destructive, though seemingly necessary, wars to achieve their independence or to maintain it. They are still doing so. But they are finding that independence is not enough. Everywhere men and women of goodwill are beginning to perceive that survival in a swiftly changing world requires something more than independence. It demands action in common. And many are awakening to the fact that there is but one coordinating and cementing guaranty of achieving this. It is the acceptance of and allegiance to the bond of love and true goodness, which the Bible teaches has its source in the infinite Principle, Love, commonly called God.

Many of these perceptive men and women are admittedly motivated by that love for God and for man in His image which the seers and prophets from the beginning of history have glimpsed and insisted on as the basis of true brotherhood. The certain result of obedience to that law was succinctly summarized by the Apostle Paul in his letter to the faithful in Rome: "We know that all things work together for good to them that love God, to them who are the called according to his purpose." Rom. 8:28; 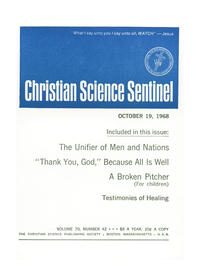