[The above is an abbreviated, postproduction text of the program released for broadcast the week of June 2-8 in the radio series, "The Bible Speaks to You." Heard internationally over approximately 1,000 stations, the weekly programs are prepared and produced by the Christian Science Committee on Publication, 107 Falmouth Street, Boston, Massachusetts 02115.]

Questioner: Let's say that a new neighbor moves in down the street or a new worker joins the office staff, and it's obvious that his background is different from ours. Many of us would be greatly tempted to prejudge him. We would find ourselves judging, perhaps, on the basis of his appearance or the way he says what he says. We may feel it isn't fair to do this. But in practice it's pretty difficult not to prejudge, wouldn't you agree?

Speaker: Yes, I would. It seems to be quite a natural thing to do. We're inclined to stereotype others, to put them into religious, racial, and social groups, and to judge them by their accents and other features. We do tend to put people in certain categories, but it's a limiting process. 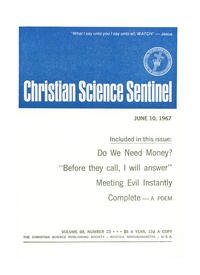