It has become traditional to think of New Year's Day as a turning point, as a time to review our mistakes of the past year and to resolve to do better in the coming year. Thinking of the new year as a fresh opportunity, we speak of "turning over a new leaf" and "taking a new lease on life." In each case the implication is improved behavior.

In Bible times certain individuals were given new names at a turning point in their experience. Notable among these men were Jacob, who became Israel; Simon, who received the name Peter; and Saul, who took the name of Paul. It Is evident from reading the accounts of the lives of these men that the new names were not superficial changes but were significant of new natures, changes of consciousness. 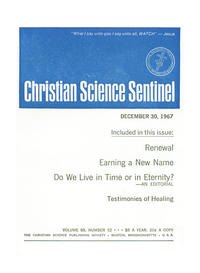