[The above is an abbreviated, postproduction text of the program released for broadcast the week of September 29—October 5 in the radio series, "The Bible Speaks to You." Heard internationally over more than 1,000 stations, the weekly programs are prepared and produced by the Christian Science Committee on Publication, 107 Falmouth Street, Boston, Massachusetts, U.S.A. 02115.]

RADIO PROGRAM NO. 287 - Doing Something About a Bad Disposition

Questioner: Sometimes we have to deal with people who have bad dispositions. If they don't have good dispositions, is not this something that they and those around them simply have to learn to live with?Speaker: No, I don't think we have to accept a bad disposition as permanent or inevitable, as though it were a fact of one's nature.

The Bible indicates a basis for doing something about a bad disposition. Actually it gets down to this question: Is one approaching the problem from the standpoint that man is a helpless bundle of good and bad dispositional traits or from the basis of learning more of man's true disposition as the expression of God?Questioner: I wonder if people ever think that deeply about it. Some individuals have grown up with bad dispositions. Most of us would say that's the way they are.Speaker: If we want to accept that as the true nature of man, that might be true. In fact, sometimes we say an individual has a certain disposition because of his nationality. But here we're talking about the material, mortal view of man, instead of looking beyond that to his true nature as the child of God and discovering his eternal characteristics in the likeness of God, infinite Spirit. The Bible says (Gal. 5:22, 23), "The fruit of the Spirit is love, joy, peace, long-suffering, gentleness, goodness, faith, meekness, temperance: against such there is no law."Questioner: But doesn't a lot of this problem of disposition begin in childhood when one gets a reputation for being a grouch or temperamental or hard to get along with, and then that reputation follows him all his life?Speaker: Well, if one learns to look beyond the outward appearance of things, to reach out to the Love that is God, dispositions can be changed. Actually we're not hopeless victims of family environment or dispositional traits. 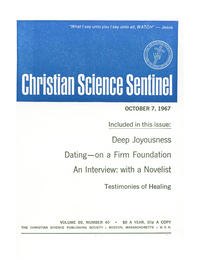