"True immunity ... is the fact of good being the only side there is"

In the Bible we read, "He that dwelleth in the secret place of the most High shall abide under the shadow of the Almighty" (Ps. 91:1). Many people have turned to this verse in times of stress and danger and have sought and gained protection, but its deeper meaning implies a sense of protection that extends far beyond the warding off of a particular threat. Rather does it promise total immunity from the conditions that mortal existence would try to put upon us.

The reason for this total immunity is this: because "the secret place of the most High" is the only true dwelling place of man, God's likeness, he cannot in fact dwell anywhere else. He is therefore not exposed to mortal existence, since all the Life that there is or can be is the Most High, or God. Neither the Life that is God nor the idea of Life that is man has ever entered or can ever enter the limited, circumscribed, and finite misconception of life called mortal existence.

This, then, is the starting point for the student of Christian Science, and he makes this statement practical by ceasing to identify himself at any point with the mortal and by claiming the infinite I AM to be the only Life he has ever had and the only Life he has now. To him, existence is spiritual and is therefore a state of consciousness, not of physical structure. He knows that his concern is with what he is accepting as consciousness, since it is this which determines his experience. He proves that as thought dwells in "the secret place," or as consciousness reflects the Mind that is God, this acts as a law of protection, harmony, and normality to his experience. Why? Because he is living consciously in a place where mortal conditions do not apply.

Immunity, therefore, is not simply protection from mortal conditions. True immunity precludes mortal conditions. It is the realization of the allness of the infinite I AM that forbids an alternative. It is not just a matter of good being on our side; it is the fact of good being the only side there is. The premise of evil is that there is a power or a life apart from God, good. We should never accept this premise and then try to ward off its subsequent effects. The premise and its effects are one, and it is their totality that is precluded by the allness of good.

A Christian Scientist was in a holiday resort at the time an epidemic was fairly rampant. In thinking about it, he saw clearly that there was little point in his accepting the belief that he had been exposed to contagion and then turning to Christian Science as a sort of talisman to keep the effects of the exposure from him. Instead, his thought was turned to the fact that as the reflection of the infinite I AM he was "not a dweller in matter."

It was seen that he who dwells in the Most High can never have lived in mortality and that he who resides in good has never been resident in, and therefore never exposed to, evil. The Scientist understood that his immunity lay in the spiritual fact that he had never been exposed to contagion. When people commented on the fact that he had spent his holiday in a stricken place, he was able to know within himself, "They are not talking about me, because I never was there!" The protection was in his correct self-identification.

We sometimes talk about doing what we call protective work for various situations, and indeed it may sometimes be necessary to refute specifically an error that is insistently presenting itself. But the mental attitude of protecting oneself against a myriad of possible dangers is not only laborious but uncertain, since it would be so easy to miss something that one had not thought about!

In fact, whatever form a lie takes and however manifold its disguises, one is always dealing fundamentally with a single lie—the premise that there is life or power apart from God. This lie is dealt with from the conscious standpoint that Life is God, whose greatness cannot be confined in mortality, whose goodness cannot know evil, and whose infinitude cannot permit an alternative. Thus we rest in our Christlike understanding of the allness of good. As Mrs. Eddy says in her book "Pulpit and Press" (p. 4), "Who lives in good, lives also in God,—lives in all Life, through all space." That is how and where we live, and it is that which constitutes our protection.

We have only to open a newspaper to realize how many crisis spots there are in the world today. We may be tempted to feel that one person can do little or nothing to stem this tide of unhappy event...

The love God has for you

Our always-present help during crises

In Hutchinson, Kansas, in 2001, there was a crisis. Mid-morning, fiery geysers of gas and water began erupting throughout our city. As Mayor, I was notified immediately and raced downtown to o... 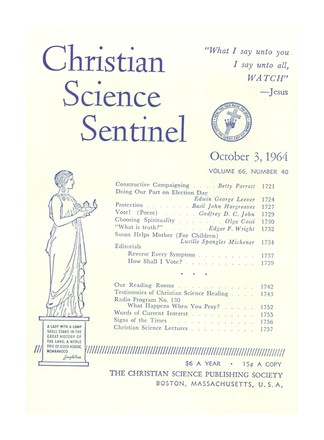 Doing Our Part on Election Day

How Shall I Vote?

It is with great gratitude that I...

I am happy and infinitely grateful...

The illuminating statement by...

A previous testimony of mine...

It is with deep gratitude to God...

RADIO PROGRAM No. 130 - What Happens When You Pray?