[The above is substantially the text of the program released for broadcast the weekend of May 25-27 in the radio series, "The Bible Speaks to You," heard internationally over more than 800 stations. This is one of the weekly programs produced by the Christian Science Committee on Publication, 107 Falmouth Street, Boston 15, Massachusetts.]

HOST: Gather a group of teenagers together or listen to their parents talking things over among themselves, and you'll find agreement on at least one point—that today's young people are being faced with temptations and basic moral decisions many years earlier than was the case a generation ago.

Surveys show that most young people want to live according to high moral standards. But they're not clear on what such standards are. A recent Gallup report in the Ladies' Hume Journal showed quite a range of teen-age viewpoints. One said, "If I took part in anything immoral, I'd not be able to live with myself or face others." But another took this view: "It all depends on the individual. Some can be happy with no moral code, others must be straight as an arrow." 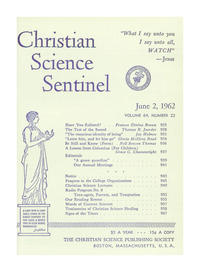