[The above is substantially the text of the program released for broadcast the weekend of April 13-15 in the radio series, "The Bible Speaks to You," heard internationally over more than 700 stations. This is one of the weekly programs produced by the Christian Science Committee on Publication, 107 Falmouth Street, Boston 15, Massachusetts.]

RADIO PROGRAM No. 2 - "Bless them that curse you"

HOST: The most destructive force in the world is common garden variety hatred. I say "garden variety" because it crops out in the lives of ordinary people—in a heedless flash of anger, in bitterness among neighbors, in divorce, in the nursing of family feuds. This kind of thinking is the dynamite that explodes, causing catastrophe.

Harry and Bonaro Overstreet have said in their book "The Mind Alive" (p. 239): "The world's misery today is a report on multiple conflicts, large and small, that have got out of hand. The winds of hostility that men have sown have become the whirlwinds that threaten to destroy them." 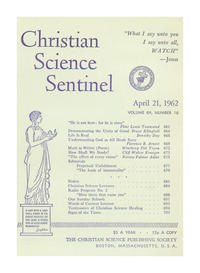