The world is in a transitional stage of development which is generally attributed to knowledge of matter. Some call this stage the beginning of the "Era of Atomic Energy." Already the release of atomic energy—the potentials of which are equally great for the good of the world or for its destruction—is changing the thinking of mankind. They know that as a tool of the carnal mind, atomic energy could destroy civilization, but when brought into subjection to moral law and enlightened purposes, it could bless the race tremendously. Confusion seems to mark the age as men struggle to adjust their thinking to problems present and possible.

A stir of thought always accompanies transitional stages, as history discloses. Mary Baker Eddy says in "Science and Health with Key to the Scriptures" (p. 65), "An unsettled, transitional stage is never desirable on its own account." Looking further in this book, one is cheered by her words on page 96: "Mortal error will vanish in a moral chemicalization. This mental fermentation has begun, and will continue until all errors of belief yield to understanding." 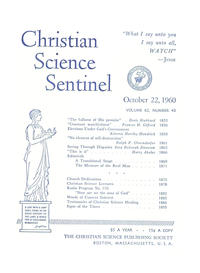