It is not surprising that atomic power should claim the attention of the world so soon after the discovery of Christian Science. For this Science demonstrates true power as the energy of divine Mind; and it is in accord with the so-called carnal mind's law of opposites that error produces counterfeit conceptions of spiritual truths, which God reveals to mankind. True atomic power is the action, or will, of God. It has been released to human thought in our age through Christian Science; and this power unfolds God's ability to make His universe and man spiritual and indestructible. Mary Baker Eddy explains in "Miscellaneous Writings" (p. 190): "Atomic action is Mind, not matter. It is neither the energy of matter, the result of organization, nor the outcome of life infused into matter: it is infinite Spirit, Truth, Life, defiant of error or matter."

Christian Science shows the distinction between Spirit, God, with its divine energies expressed in a spiritual and beneficent universe, and matter, with its counterfeit energies seemingly congealed in the material atom and capable of great destructive power when released through atomic action. That true atomic action is "defiant of error or matter" is the hope of civilization. It is this fact that prophesies the preservation of civilization in the face of all threats of destructive materialism. 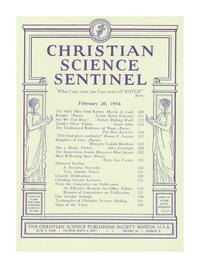