Esther had been attending the Christian Science Sunday School for several years. During this time she had learned to read by herself and often turned to the Bible to review the Ten Commandments (Ex. 20:3–17) and to think about the promises contained in the Beatitudes (Matt. 5:3–12). She knew the meaning of the words, too, for her Sunday School teacher had asked her to look them up in a dictionary. This also helped her to understand the Bible stories which were read in the Sunday School class. Her love for Christian Science grew as she learned how careful Mary Baker Eddy had been to use exactly the right word in the right place when she wrote the textbook, "Science and Health with Key to the Scriptures."

One morning the members of Esther's class were learning the Lord's Prayer with its spiritual interpretation as given in the textbook. There was one word in the last line (p. 17), "For God is infinite, all-power, all Life, Truth, Love, over all, and All," which seemed puzzling to Esther, and that was the word infinite. She had looked it up in a dictionary, but still it was not clear. She just could not see how anything could be endless, for one of the meanings of "infinite" is "endless." 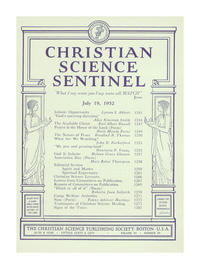