"That individual is the best healer who asserts himself the least, and thus becomes a transparency for the divine Mind, who is the only physician; the divine Mind is the scientific healer." This statement by Mary Baker Eddy is found in her "Miscellaneous Writings" (p. 59). It is encouraging because it shows the possibilities of healing power for all who are willing to quench the assertiveness of the human self and let the nature of the heavenly Father find expression in their hearts.

Christian Science explains how this may be done through scientific demonstration. It reveals the truth of one Mind, one God, and of man in Mind's likeness, spiritual and immortal. And this knowledge corrects the belief that there is a carnal mind, individualized as one's own physical senses, which presents man and the universe in a material and mortal guise. This Science proves the unreality of the mental opacity which causes God's kingdom to seem inaccessible and His rule remote. If animal qualities, material laws, and educated beliefs seem too strongly entrenched to be eradicated, Christian Science comes to the rescue and proves that all things are possible to God, as Christ Jesus taught. Fear, hate, and lust go down before the humility, love, and purity that are provable as qualities of God's sons. Material law yields to the knowledge of God's will. Educated false beliefs depart when the false consciousness that conceives them is made to disappear in the presence of the one Mind. Then the healing forces of pure good become apparent. 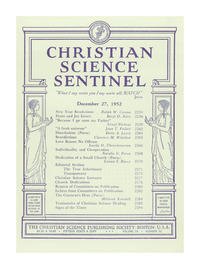