THE SACRIFICES OF RIGHTEOUSNESS

In the fourth Psalm the injunction is given, "Offer the sacrifices of righteousness, and put your trust in the Lord." A dictionary defines "righteousness" as "justice, uprightness, rectitude; ... virtue, integrity," and in Christian Science we learn that we attain these qualities by seeing that they belong to man as the reflection of God. We may, therefore, say a righteous man is a right thinker, and righteousness the result of right thinking.

The writer found herself faced with the necessity of making a decision which carried with it far-reaching consequences. After much prayerful work and study she was led to take a certain step, but after she arrived at this decision, mortal mind began to suggest so many difficulties that she was beset with fears and doubts as to the wisdom of the course she had decided to follow. She began to question whether after all she had really been following the guidance of the divine Mind or had yielded to the suggestions of human will or mortal mind. So acutely did this uncertainty torment her thought that she would lie awake the whole night going over and over the problem. 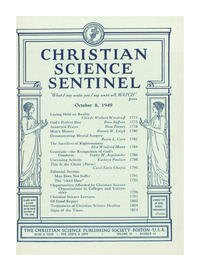