The newly elected President, Luther Phillips Cudworth, C.S.B., of Boston, Massachusetts, is a native of Iowa. During his early childhood his family moved to St. Paul, Minnesota. There he received his education in the public schools, which was supplemented later by special courses at Harvard University and Harvard School of Business Administration.

After several years' connection with a publishing business in St. Paul, Mr. Cudworth moved to Portland, Oregon, where he was associated with a public utilities company.

Send a comment to the editors
NEXT IN THIS ISSUE
Testimony of Healing
The inspired Word of the... 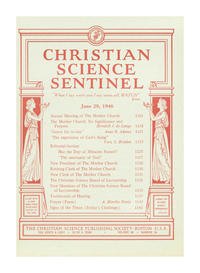