Barnacles have in the past fastened themselves in great numbers to the hulls of ocean-going ships and, if they have not from time to time been removed, they have considerably retarded the ships' movements. Chemical research has now provided a paint for ships' hulls which, by its chemical properties, prevents barnacles from fastening themselves to the bottoms of the ships.

Many mortals are unhappy because they believe that some form of sin, sickness, impairment, unpleasant relationship, or untoward circumstance has fastened itself barnacle-like on their lives, and they see no way to gain their freedom. They believe that evil can fasten and attach itself to them in some form, and that they have little hope of successfully disputing its aggressive claim. If what mortals see, hear, and feel materially is accepted as final evidence of the condition of man, this sad conclusion is justified. 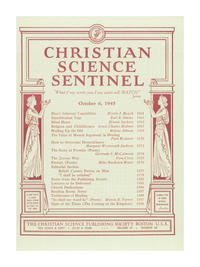