Like many others, I came to Christian Science seeking healing. I was very miserable with a malignant attack of eczema, and after many months, getting no relief from physicians, and upon the recommendation of a neighbor, I attended several Wednesday evening testimony meetings at the local Christian Science church. I soon came to the conclusion that if the testimonies of healing which I heard there were true, then Christian Science could heal me. I inquired about a practitioner, and was referred to one, who lent me a copy of Science and Health by Mrs. Eddy. The practitioner's home was not far from my own, and two or three times a week I stopped in to chat with her, and to listen to the truth, she giving me daily treatments for my difficulty.

This continued for just four weeks. I became so interested in the textbook, which I read and studied at every opportunity, and the practitioner's help and explanations, that I forgot I was seeking healing, and accepted the revelation of Truth as a child would accept a message or statement from his parents. I woke up one morning greatly improved, except for one spot on my leg, where the eczema had been the worst, and even that cleared up in a few days. That was fourteen years ago. 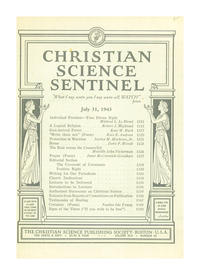