The word "arrested" has come to have a rather forbidding sound because it is so commonly associated with crime. But in its original significance it has quite a different meaning. One dictionary defines "arrest," in part, as the "act of stopping, or restraining from further motion." In this construction the word takes on somewhat more of a mental meaning.

This meaning of the word came to a student of Christian Science as he attended a Christian Science service in a penal institution. A young man who was incarcerated there was present and seemed very much interested in the reading of the Lesson-Sermon in the Christian Science Quarterly. He stopped after the service to exchange a greeting with the visitor, and as he closed the conversation remarked, "It was a happy day for me when I was arrested." Suddenly the word "arrested" took on a higher meaning for the student. 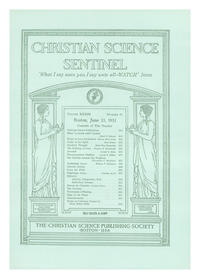