A Lesson in Channel Finding

One summer day in the Rocky Mountains, when far up one of the canons, a group of travelers left the trail, and to their delight soon found themselves in a beautiful meadow of luxuriant grass sprinkled with daisies. While they stood marveling at the beauty of the spot, they heard a low murmur,—almost a song,—and there in the meadow they discovered a brook, crystal clear, rippling downward to join the larger stream just below. At once they realized why the grasses were so green, the birds so numerous, and the flowers so gay here on the rugged mountain side; and as they went along, they rejoiced in the purity of the brook and the sweetness of its music.

Years afterward one of these travelers, a student of Christian Science, was at work on a problem which still seemed baffling after months of study and earnest effort. This student had expended time, money, and labor in becoming fitted to carry on a certain work, but seemingly no channel for the work presented itself. On just such a beautiful summer day as that afternoon so long before, when the travelers had discovered the brook, mortal mind was arguing busily and dolefully with the student. It seemed that the final stage of discouragement had been reached. "Give up this work altogether," came the suggestion. "Try something more material. Better be doing something not quite so high, rather than sitting here idle." Thus came the arguments to the student's tired thought. Then, suddenly, in all the beauty of its flowery setting, the brook on the mountain side, forgotton for years, flashed before the student's mental vision. "Why," she exclaimed aloud, startled from the mesmeric spell of discouragement, "the brook found a channel!" 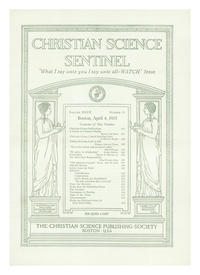