WHAT a remarkable illustration of true church government our Leader has given us in the By-laws set forth in the Church Manual! And how surely and persistently the Christian Science movement grows and prospers as these rules are studied and obeyed by the members of The Mother Church! At the same time, every conscientious student recognizes that he has yet much to learn from a still deeper and more consecrated study of those rules which Mrs. Eddy tells us, in "Miscellaneous Writings" (p. 148), "will do for the race what absolute doctrines destined for future generations might not accomplish."

There is perhaps no more marked feature of the form of government which Mrs. Eddy established through spiritual discernment than the freedom, and even the independence, experienced by those branch churches or societies and individuals that are cooperating in their endeavor to understand and obey the rules thus set forth. The claim of evil or animal magnetism always attempts to reverse the truth. So, with regard to The Mother Church, it would suggest among other things, to those ready to listen to pernicious whisperings, that the form of government is autocratic. 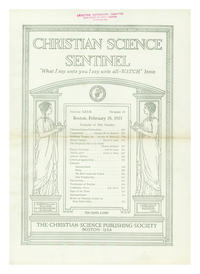