When the writer of the article under consideration said:...

Hugh Stuart Campbell, Committee on Publication for the State of Illinois,—Kankakee

When the writer of the article under consideration said: "Christian Science is a doctrine of denials. They deny pain and sickness and even sin," he left an unfinished statement with his readers. While it is true that Christian Science denies the reality of pain, sickness, and sin,—that is, denies them as having any part in God's spiritual creation, of which the Bible declares, "And God saw every thing that he had made, and, behold, it was very good,"—Christian Science in no wise ignores such discordant conditions. On the contrary, it recognizes them, but only as phases of human experience which must be overcome by a correct understanding of God. While sick and sinful conditions may seem very real to any one who believes in them, Christian Science teaches its followers that through a correct understanding and application of its teachings one may be freed from such discordant experiences, and so attain the joyous physical and mental freedom foretold in the prophecy of Jesus: "Ye shall know the truth, and the truth shall make you free."

The Bible does not record that Jesus ever gave drugs or recommended obedience to so-called laws of physiology or hygiene. It is true that he ignored physical symptoms, as when he said to the paralytic man, "Stretch forth thy hand," and behold, it "was restored whole as the other." It was the Master's perfect concept of man as a spiritual idea of God, who is Life, that healed multitudes twenty centuries ago, not material contact as, for example, the laying on of hands; and his same precepts and practices are revealed and demonstrated to-day through Christian Science. Your contributor acknowledges that the method employed at the revival meeting under discussion is not the system employed in healing the sick and reforming the sinner as taught and practiced in Christian Science.

Send a comment to the editors
NEXT IN THIS ISSUE
Article
The Christian Science textbook, "Science and Health with Key to the Scriptures"... 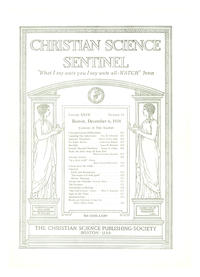