When our beloved Leader, Mrs. Eddy, proposed the idea of a Sanatorium under the supervision of The Mother Church where the so-called sick could go and receive loving and efficient care while regaining their health, and where those under any sense of burden might find a refuge from the perplexities and problems confronting them, she must have had in thought a home not only in the sense of material appointments and comforts, but more especially the mental or spiritual environment which would bring to the individual a more spiritual sense of existence as it is in God. Since the natural order of making divine Love known to men is through the qualities and characteristics of loving-kindness, as illustrated in the daily life of Christ Jesus, so his life, his knowledge of Spirit and the spirituality of creation, his compassion, patience, encouragement, and inspiration, become the model of daily living and serving for those who are the helpers in this haven of peace and health.

The Christian Science Benevolent Association is an activity of the Christian Science movement, an institution in which the demonstration of Truth's healing power is undertaken in an institutional way. Its usefulness and accomplishement is therefore the demonstration of Christian Scientists without regard to locality. Responsibility for the success of this undertaking does not devolve entirely upon The Christian Science Board of Directors or the Trustees of the Benevolent Association, nor even upon the practitioners called upon by guests, nor upon the nurses and other helpers in the Sanatorium; but calls for the supporting thought of Christian Scientists everywhere. Understanding the power of right thinking, they protect it from the onslaughts of mortal mind, and therefore cooperate in giving to the world conclusive proof that the understanding of Truth heals and blesses mankind. Every case of healing accomplished at this Sanatorium through the practice of Mrs. Eddy's teachings not only is a proof to others that this spiritual mode of treatment is effectual, but also makes healing easier everywhere, because the overcoming of belief in disease is not a matter of locality, and every such demonstration lessens the general fear of disease and belief in it. 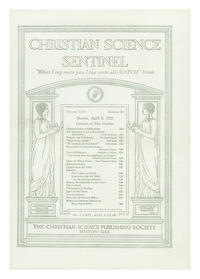