In the dictionary may be found the following definitions of entity: "Essence;" "real being;" "existence;" and Mrs. Eddy on several occasions in the textbook, "Science and Health with Key to the Scriptures," gives us a wider concept of the meaning of this word and of the spiritual expression and relationship between God and man that it implies. It is our human sense of entity or real being that has to change, so that the right concept of man created in the image and likeness of God may be attained. To the man in the street, the material, imperfect image is the real and substantial entity, and the spiritual, perfect man a far-off phantasy, perhaps to become apparent in some future state of existence, commonly known as heaven; whereas Mrs. Eddy reminds us on page 369 of Science and Health, "In proportion as matter loses to human sense all entity as man, in that proportion does man become its master," and on page 470, "If there ever was a moment when man did not express the divine perfection, then there was a moment when man did not express God, and consequently a time when Deity was unexpressed—that is, without entity."

If we insist that man's entity or true being is inseparable from the creator, and that man is necessary to His expression, then it can be clearly seen that there is no veil of matter to shut us off from the "fruit of the Spirit," which, as Paul puts it, "is love, joy, peace, longsuffering, gentleness, goodness, faith, meekness, temperance: against such there is no law." When one even faintly perceives the overwhelming grandeur of the truth which Christ Jesus over nineteen centuries ago affirmed would set men free, the truth that all creation is indispensable as the idea, expression, or reflection of Life, Truth, and Love, this understanding of man's true entity proves the falsity of the universally accepted teaching that we are miserable sinners, a teaching under which for countless generations "the whole creation groaneth and travaileth in pain together until now." To argue that the sinning, sick, and dying man is the real entity would be absurd, and in support of this contention Mrs. Eddy says, on page 356 of the textbook, "Sin, sickness, and death do not prove man's entity or immortality," and further sums the whole matter up when she states on page 477, "Separated from man, who expresses Soul, Spirit would be a nonentity; man, divorced from Spirit, would lose his entity." 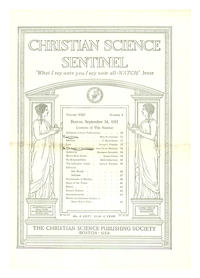