A number of years ago, while I was still a schoolgirl in...

A number of years ago, while I was still a schoolgirl in Switzerland, a dear member of the family spoke to me about God in a way I had never heard before and which met a deep longing of my heart. Having at an early age been deprived of a mother's affection and care I was naturally inclined toward religion as a source of love and comfort, and especially liked the New Testament with the teachings of Christ Jesus. For several years I had eagerly attended the Sunday school of a denominational church and in due time was confirmed, after a period of earnest religious instruction. This event had been looked forward to with great hope, which, however, soon faded as I found myself no nearer the understanding of God which I had expected to gain from it. At this point an aunt who had been healed through Christian Science spoke to me of God as infinite good, as our only physician, and said that He was not the author of sickness and discord. I was told that the cures which Jesus performed were being repeated to-day and were possible because the Christ is ever present and available in every age. Some pamphlets printed in French were given to me to read, since the textbook of Christian Science, "Science and Health with Key to the Scriptures" by Mrs. Eddy, had not then been translated into a foreign language and I had no knowledge of English. I knew that what I read was true because it fulfilled the Bible promises and corroborated the Master's teachings, making them again practical in our age. From that time on, God became to me an ever present help, and I began to understand that His kingdom is within us. Soon the way opened beautifully for me to go to England and learn the language. How I was provided for and protected would take too long to tell, but from that day to this I have never ceased to be thankful for Christian Science, which has revealed to me the "Rock" upon which to build in safety. The study of Mrs. Eddy's works and of the Bible gave me much food for thought and gradually built up an understanding of God and man which is still unfolding and which has been the greatest blessing of my life.

When I accepted Christian Science as a religion I never questioned for one moment its adequacy to heal the ills of the flesh, and I have had many proofs of healing. One healing which occurred several years ago stands out in my thought. I had been suffering all day from a severe attack of influenza and lay helpless on a couch, unable to read. Different Bible passages were remembered, among them the following from Isaiah: "Fear thou not; for I am with thee: be not dismayed; for I am thy God: I will strengthen thee; yea, I will help thee." Then the question came: Who is my God? Suddenly I became conscious of a living presence and power beyond anything I had ever felt; I was lifted to that point where I realized the truth of Mrs. Eddy's statement found on page 468 of Science and Health, where she says, "All is infinite Mind and its infinite manifestation, for God is All-in-all." So what was there to interfere with the divine order? The relief was instantaneous; the fever left, the pain ceased, all sense of weakness disappeared, and I got up rejoicing. The spiritual uplift which came with this beautiful healing has never been forgotten and has often encouraged me in the years that have followed. Since taking up the study of Christian Science I have enjoyed the best of health, in different climates, although as a child I had been considered delicate. Recently a fully developed cold was healed within fifteen minutes after I began working as Christian Science teaches us to do, and this is only one of a number of similar experiences which I have had.

Send a comment to the editors
NEXT IN THIS ISSUE
Testimony of Healing
Twenty-five years ago I was healed through Christian Science... 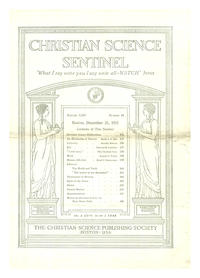