It has been well said that in order to be a success in any thing one must fully believe in one's self; but the belief in one's self requires also a full knowledge of one's self, and here it is well to consider the counsel of Paul when he wrote the Corinthians saying, "And if any man think that he knoweth any thing, he knoweth nothing yet as he ought to know. But if any man love God, the same is known of him." Mortal mind has so long endeavored to usurp the place of divine Mind, that, due to its own noise and clamor, it has come to believe itself to be something other than a mere negation or the supposititious opposite of true Mind, which Mrs. Eddy defines thus (Science and Health, p. 591): "Mind. The only I or Us; the only Spirit, Soul, divine Principle, substance, Life, Truth, Love; the one God; not that which is in man, but the divine Principle, or God, of whom man is the full and perfect expression; Deity, which outlines but is not outlined."

Out of this most subtle suggestion of more than one infinite and supreme power and that power, God, has grown that malignant weed, the belief in separation. It is quite evident to the physical senses, which constitute a part of mortal mind's horde of representatives, that a condition of division or separation is being continually manifested. These manifestations are innumerable and to be observed in all of the so-called kingdoms, the vegetable, mineral, and animal. That sense of division or separation, however, to which mankind seems the most sensitive is that manifestation which is ever occurring in his daily intercourse with his fellow men. Separation has become an occasion for regret, if not deep sorrow. However, thanks to the consecration of Mary Baker Eddy, a woman who had drunk deep of the material sense of separation and, through the clear and piercing light of divine intelligence, perceived the awful grotesqueness of mortal mind, mankind has been given the means whereby joy and activity are recognized as consciousness rather than sorrow. This means is a spiritual understanding of the Bible, gained through a study of Science and Health. 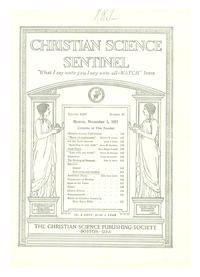