In attempting to write a Christian Science testimony,...

In attempting to write a Christian Science testimony, experiences, enduring proofs of the works of Christian Science, come to me out of the past, each equally beautiful and conclusive. There are two things deeply engraved on the thought of all Christian Scientists who have sought this Science for healing purposes: the first, when they first sought and received healing from another, and the second, when they first proved for themselves the efficacy of this scientific method of healing.

Twenty-three years ago I first heard of Christian Science. I had never been considered strong, had always suffered from severe colds and sore throat, then I met with an accident, and for about five years suffered incessantly. I could not eat or sleep. One of Chicago's leading physicians diagnosed my trouble as a severe form of stomach trouble termed nervous dyspepsia with nervous prostration, spinal irritation, and other diseases supposed to follow a nervous shock. He also said I would never be anything but a nervous wreck.

Send a comment to the editors
NEXT IN THIS ISSUE
Testimony of Healing
When I turned to Christian Science, twelve years ago,... 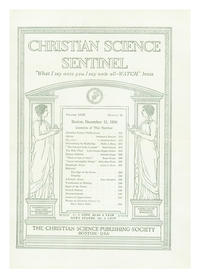