In his second epistle to Timothy, Paul says, "Study to shew thyself approved unto God, a workman that needeth not to be ashamed, rightly dividing the word of truth." Upon being told to go to a reading room to read some of the Christian Science literature, the writer, in his early experience, was filled with a sense of doubt as to what good that would do, since he had always been in the habit of using some remedy in the event of sickness. He did not at that time understand the limitless power of a right idea to overcome sickness and sin; but from an earnest study of the literature he found himself being raised up gradually from "the valley of the shadow of death," as it were, from that which physicians and material medicine had failed to cure. Then he saw the immense value to a sick person of the authorized literature of Christian Science.

As he progressed in the study of this wondrous truth, he found that the mere reading of the words, without getting the essence contained therein, was shallow emptiness, doing "no more for mortals than can moonbeams to melt a river of ice," as our Leader says on page 241 of Science and Health. Above all he found that the thing of vital consideration was to perceive and to comprehend the spiritual ideas which are portrayed on each page of our literature, for by them we are healed. Does not obedience to Paul's admonition to Timothy, "Study to shew thyself approved unto God," consist in perceiving, comprehending, and utilizing these spiritual ideas, which are found in the Bible, in all of our Leader's writings, and also in our periodicals? When one gains the perception of these right ideas, he is indeed "a workman that needeth not to be ashamed," for he is "rightly dividing the word of truth." By accepting and making these ideas a part of his consciousness, he is being transformed by the renewing of the mind; spiritual ideas are taking the place of false material beliefs and making for him all things new. 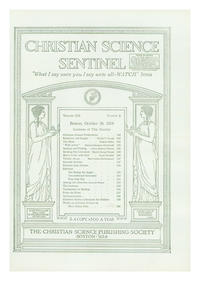