On page 476 of "Science and Health with Key to the Scriptures," Mrs. Eddy says, "God is the Principle of man, and man is the idea of God;" and on page 465 she says, "Principle and its idea is one, and this one is God, omnipotent, omniscient, and omnipresent Being." These statements have often been a source of great help to the writer, as they have reminded her of man's birthright of divinely bestowed power with which to nullify the arguments of error. Man is a spiritual idea, and just as far as we are actively conscious of the fact that "Principle and its idea is one," are we able to bring into our experience that dominion over material sense which reflects the infinite power of God. In doing this, we do not claim to possess anything that does not rightly belong to us, for we can only reflect this infinite power by knowing man's unity with the source of all good and demonstrating this at all times.

Jesus said, "I and my Father are one," and in saying that he was claiming the power which his knowledge of his oneness with the Father gave him; but he also said, "I can of mine own self do nothing," thereby acknowledging his inability apart from God to do any of the wonderful works which he did. To realize even in a small degree what it means to be a son of God is to gain a sense of freedom from the limitations of material sense, and so to help lift the burden of sin, disease, and death from humanity. It is evident that as man is a spiritual idea and is one with Principle, man can never express anything which is not in accordance with Principle; and as Principle is God, he can only reflect God, good. He cannot, therefore, in reality manifest any beliefs of sickness or inharmony of any sort, for that would be tantamount to believing that he could reflect something unlike God.

The realization of our unity or oneness with God, in the same sense that a ray of light is one with its source and has no light apart from it, shows that man has no power of his own to accomplish anything, but it also shows that nothing is impossible to man as God's reflection. To prove our understanding of this, however, it is not only necessary to acknowledge our unity with God, but to demonstrate it by destroying in our individual experience the beliefs of error which would separate us from Principle. This is beautifully expressed by our Leader in "Miscellaneous Writings" (p. 181), where she says, "Man's knowledge of this grand verity gives him power to demonstrate his divine Principle, which in turn is requisite in order to understand his sonship, or unity with God, good."

In the third chapter of Genesis the translation of the last sentence of the thirteenth verse in the Authorized Version of the Bible reads: "And the woman said, The serpent beguiled me, and I did eat." Robert Young's translation gives it thus: "The serpent hath caused me to forget—and I do eat." Does it not sometimes seem that the serpent, the lie of material sense, is still causing us to forget man's divine birthright, our sonship with God? Just in proportion, however, to our endeavor to be more constant in our remembrance of our unity with God shall we prove that the serpent's biggest lie is powerless, even though it has so long been believed true, and that man, because of his unity with God, is incapable of forgetting that he is an expression of divine Mind, spiritual and perfect.

Peace is the consciousness of God’s presence and power, which are everywhere and for all time. It isn’t just the absence of turmoil. True and enduring spiritual peace is a powerful condition, and i...

Report from Milan: Finding spiritual peace amid the pandemic

I live in Milan, the largest city in the region of Italy most affected by the global pandemic. We quickly went into almost total lockdown. As I write this in late April, we are still inside. Like s...

No limited connection to good

Recently, while working on my computer, I lost access to my email. A diagnostic message came up on the screen saying, “Limited connection to the internet.” I rebooted, regained my full internet con... 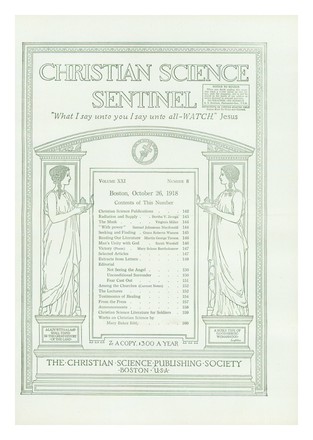 There is never any particular advantage to be gained by...

It seems an honest query, worthy of an answer, which...

Our critic is reported as saying that sickness is a real,...

The statement made in a letter advocating the use of a...

Not Seeing the Angel

Notice to Churches and Societies

I feel it would not be right for me to withhold any longer...