WHEN the patriarch Samuel set up his Eben-ezer "between Mizpeh and Shen," on the occasion of a signal victory over the Philistines, he not only commemorated God's ability to help, but foreshadowed a willingness to do so, and intimated large possibilities in this direction throughout all time. Thus in his significant statement of remembrance, "Hitherto hath the Lord helped us," he rebuked prevalent faithlessness, and established in the form of irrefutable logic a comprehensible foundation for wholesome faith in Deity in all ages. The admission that God has ever helped, carries with it the inevitable conclusion that He will continue thus to help in every hour of need.

When David, an unarmed shepherd boy, eschewing the armor of Saul, went boldly forth to face a fully armed giant, he reassured himself as well as Saul with the retrospective argument, "The Lord that delivered me out of the paw of the lion, and out of the paw of the bear, he will deliver me out of the hand of this Philistine." He was thus able both to declare and to prove that "the battle is the Lord's." On another occasion in the experience of God's chosen people, when their attention was definitely directed to the task of subduing the "seven nations" which were said to be "greater and mightier" than themselves, they were reminded, "Thou shalt not be afraid of them: but shalt well remember what the Lord thy God did unto Pharaoh, and unto all Egypt. 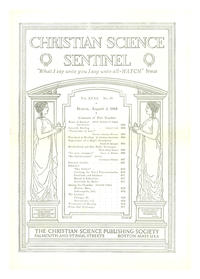