I have been interested in Christian Science about three...

John B. Howe with contributions from Robert M. Howe

I have been interested in Christian Science about three years, and during that time have overcome many discordant conditions. At the age of nineteen I had reached the climax of suffering, having been a cripple for six years with curvature of the spine. After being treated by our home physician without success, a specialist prescribed a brace, which was worn for two years and a half; but as I was becoming more nervous and weak, Christian Science was resorted to because there was nothing else to try. I had heard it spoken of, but in a very unfriendly manner. My mother, however, who had been healed of a serious chronic ailment, told me of the wonderful revelation which is found in "Science and Health with Key to the Scriptures" by Mrs. Eddy, and of the power of Truth to heal; but I could not grasp the idea.

After graduating from high school I went away from home for the summer, and Science and Health was placed in my suit-case and I was asked to read it. Three months later my glasses and the brace were cast aside, for I was perfectly healed, not only physically, but mentally and morally. In the physical examinations in college and elsewhere, no doctor has found the slightest defect in the spine. I have no desire to study medicine now, as I realize that there is only one way to heal, and that is through the power of Truth. My healing came through the reading of the book, although it came slowly; yet as I understood I demonstrated, and where Christian Science was expected to be difficult and possibly absurd, it was found to be simple and logical. It is a source of great joy to me that I found the truth so early in life.

Send a comment to the editors
NEXT IN THIS ISSUE
Testimony of Healing
For a period of three years I had to be under medical care... 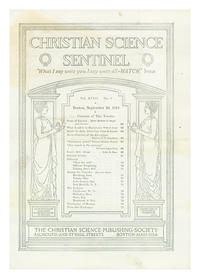