"Hold fast that which is good"

It is not an uncommon experience to come in contact with one who, having tried the recommendations and precautions of materia medica up to a point where both endurance and patience ceased to be a virtue, has reluctantly perchance, but determinedly, turned to Christian Science with a faint hope that the relief he has so far failed to obtain in the older and seemingly more pronounced school of healing might be forthcoming in the new, yet reserving to himself the alternative that in an emergency or an apparent crisis he could resort to a highly attenuated material remedy to further the work of metaphysical treatment. In the mental process leading up to the resolution to give Mind-science a trial, the mortal may have grown discouraged with much dosing, though not to the extent of having every least medicinal prop taken from under him. He is willing to know of something which seems to promise a speedier and more lasting benefit, though in a last analysis of his thought he holds to a threadbare belief that in a test case Mind could be helped and strengthened by the application inwardly or outwardly of some mild concoction.

The country tourist, luxuriating in the quiet pastoral beauty of the green meadows and rippling streams, wearies even of these scenes with their monotonous panorama, and turns regretfully perhaps, but longingly, to the hills and the wooded ravines for pastime and relief. Presently he comes upon a situation where to proceed farther would seem to his limited sense gravely hazardous. Then his thought reverts to the easy way of the gentle slope below (for the two have never parted company), and he would retrace his course by the path of least resistance back to the beaten road of clay, even though it lead to the quicksand and the mire, rather than risk his further going up to the broadening vision of the abrupt ascent. 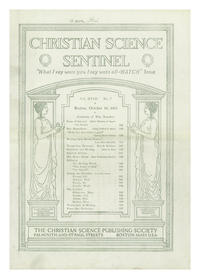