The critic made use in his first letter of two specific arguments:...

The critic made use in his first letter of two specific arguments: the antagonism of Christian Scientists to doctors, and their insistence on the unreality of evil and matter. I replied that Christian Scientists Scientists never attack doctors, but that the abuse of Christian Scientists by doctors was certainly a thing to be regretted. I also explained what I regarded as the unsoundness of his argument on the second point. He now says that Christian Science is antagonistic to medicine. Of course it is, but he surely did not write to the papers to tell the world that. Allopathy is antagonistic to homeopathy, and homeopathy to allopathy; conservatism is antagonistic to liberalism, and liberalism to conservatism. Materialism is antagonistic to idealism, and idealism to materialism. No one, however, thinks the worse of any of their exponents for this. When this critic embarks on giving chapter and verse for his statements, the barrenness of his polemical land is exposed in a moment. He is forced to be satisfied with two harmless generalities. In the first, Mrs. Eddy says that "the hosts of Æsculapius are flooding the world with diseases, because they are ignorant that the human mind and body are myths" (Science and Health, p. 150). This is very much like what, to give a single example, the Liberal press and Liberal speakers say about once a day, when they talk Conservatives as "the stupid party," or what the Conservatives say about every hour, in declaring that the Liberals are destroying the constitution. The critic's second instance is even more singularly unfortunate. It is taken form an allegory in Science and Health, and refers not even to people generally, but to materia medica. One trembles to think what he might have to say about Bunyan if he were to write a criticism of "Pilgrim's Progress."

If the critic wrote his original letter merely to point out that he regretted that Christian Science dissented utterly from the ordinary practise of medicine, I can only say that such was not my impression, nor, I think, is it the impression of your readers. I am sure it was not the impression of one of them who is not a Christian Scientist, but who drew my attention to the letter and proposed that I should reply to it. What, I am convinced, the ordinary reader would have understood, is just what I pointed out, namely, that Christian Scientists were in the habit of indulging in unseemly attacks on doctors, which they never are. As everybody knows, however, doctors are perpetually indulging in the most violent attacks on the intelligence and morality of Christian Scientists.

Send a comment to the editors
NEXT IN THIS ISSUE
Article
In a recent issue there appears a letter by a member of... 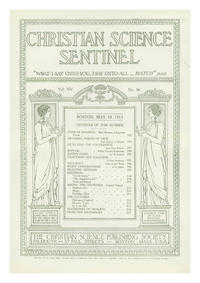