THE HEALING OF A DEMONIAC

The scientific sense of the healing recorded in the fifth chapter of Mark which has come to me in the measure of my present understanding of Christian Science, I trust may prove as valuable to some one else in the healing of mental disease as it has been to me. The man whom Jesus healed was evidently suffering from the belief in insanity, which is often the result of unsound or unspiritual reasoning. He "had his dwelling among the tombs."—in a material sense of life; and we are told that "no man could bind him, no, not with chains." It seemed that no material agency could heal him, not even the most powerful. The record goes on to say: "And always, night and day, he was in the mountains, and in the tombs, crying, and cutting himself with stones." This discontented and unhappy mortal refused to leave his self-righteousness, and continued in the false sense of life typified by the tombs, all the while wounding himself by his selfishness and stubbornness, or belief in matter as substance.

But we are told that "when he saw Jesus afar off, he ran and worshiped him." Although he discerned but faintly the Christ-consciousness which Jesus represented, he was attracted to it and loved it, and then began a struggle which ended in the triumph of Truth. Mortal sense "cried with a loud voice, and said, What have I to do with thee, Jesus, thou Son of the most high God? I adjure thee by God, that thou torment me not." This vehement demand to be let alone was made as the healing power of the Christ began to be felt; for mortal sense was stirred to its depths, and enraged almost beyond endurance by the knowledge of its own nothingness. Christ Jesus had said, "Come out of the man, thou unclean spirit. And he asked him. What is thy name? And he answered, saying, My name is Legion: for we are many. And he besought him much that he would not send them away out of the country." It would appear that Jesus gave no heed to the demand or evidence of evil, but continued his work of healing the man, though false sense seemed tenaciously persistent. 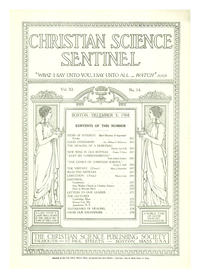