Flying the flag of the United States which has been placed nearer the pole than any other national standard, weather-beaten and somewhat disabled, the Peary arctic steamer Roosevelt arrived on the 23d at Sydney, Nova Scotia, under sail and steam, after sixteen months' vain effort to reach the pole. The expedition reached 87 degrees 6 minutes north latitude, a point two hundred and three miles from the pole. 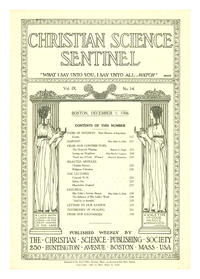