Whenever a case of sickness treated by Christian Scientists is lost, the fact is telegraphed all over the country as a matter of great news. Suppose every case lost by doctors were similarly treated? Would not the papers have to be enlarged? Tuesday a dispatch from Appleton tells of a man with many ulcers "given up by the Scientists." Then follows the statement that he would not give up medicine. Of course under the conditions the Scientists drop the case. They cannot treat cases in connection with medicine. Is there anything strange that they should give up the case if medicines are retained? Would a doctor retain a case if the patient insisted on also treating by some other radically different means? Even if you hired a man to build you a barn and then insisted on doing half the work yourself in opposition to the carpenter's plans, would he not abandon your job without delay? Clearly Christian Scientists cannot be blamed for insisting that they do their work in their own way; therefore this Appleton case cannot truthfully be headed "Given up by the Scientists." The Journal has always stood up for the Christian Scientists, that they have as good a right to treat diseases their own way as any other line of practitioners, and it is time that newspapers stopped misrepresenting them. With well authenticated cures, ranging from consumption to cancer, epilepsy, hay fever, asthma, nervous prostration, and other diseases quite generally deemed incurable by medicines, to the credit of Christian Science, if is, to say the least, unfair to give undue and false prominence to a case now and then that fails, and then not half the time a genuine failure, as is true of the Appleton case. Anything that cures disease and alleviates suffering ought to have an open field, fair play, and truthful reports about it. The misrepresentations in newspapers about Christian Science, we are charitable enough to think, generally come about through lack of knowledge of the truth, and certainly no one should condemn or misrepresent a thing he knows nothing about.—Berlin (Wis.) Evening Journal.

Send a comment to the editors
NEXT IN THIS ISSUE
Article
The Christian Science teaching that "matter" is phenomenal... 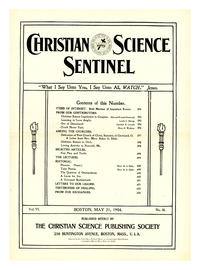