The Illusion of Fear

A little child whose father bought him a toy dog seemed to be filled with great fear when it was brought near him. He drew back, trembling and screaming. At first he would not be persuaded that his fears were groundless, but loving words and the knowing that there was nothing to fear soon banished the tears and trembling, and the little hand reached out to take the dreaded toy. Had the toy dog changed in appearance? No. What, then, had been changed? The child's sense of fear was destroyed by the truth about the plaything.

This little incident brought to my thought the groundlessness of human fears. How the dreaded monsters of mortal sense are as harmless as the little toy dog when divested of their false disguise by Truth, and I was led to compare the child's experience with my own in teaching school. My first experience found me at the head of a large country school where order seemed to be an unknown quantity. It was my problem to solve the equation and bring out the unknown quantity. As in the case of the child, mortal mind invested the school with many grotesque and fearful qualities, among other things, an undercurrent of rebellion that might bring failure to me as it had to former teachers. Sometimes these evil suggestions seemed very real, very vivid, but a constant denial of their reality, their supposed power, the knowing that they were no part of God's creation,—this annihilated their claims, and, as in Moses' time, "The serpent, evil, under wisdom's bidding, was destroyed through understanding in Science, and this proof was a staff upon which to lean" (Science and Health, p.321). 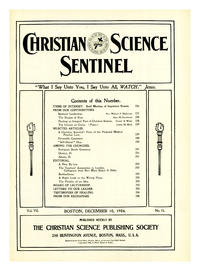