The Most Telling Fact

It is quite probable that the event of Communion week which appealed most strongly to those who are not Christian Scientists was the Wednesday evening meeting. Certainly nothing could have created a more profound impression than the almost unanimous response to the invitation to all who had been healed by Christian Science, to testify to the same by rising to their feet. That some eight thousand persons should thus publicly acknowledge their indebtedness to the healing power of Christian Science is of itself a tremendous fact and one worthy of most serious consideration. Yet it is but corroborative of the testimony of the many individuals who told of their rescue from the most serious physical conditions, even impending death.

Our Master said, "These signs shall follow them that believe," and the New Testament is so filled with the thought of his "mighty works" that we wonder why and how the world's concept of his mission became so narrowed as to lose sight of this practical side of his ministry. That these signs followed the preaching of Peter and the immediate disciples of Jesus is shown in the following passage from Acts; "And by the hands of the apostles were many signs and wonders wrought among the people; ... insomuch that they brought forth the sick into the streets, and laid them on beds and couches, that at least the shadow of Peter passing by might overshadow some of them. There came also a multitude out of the cities round about unto Jerusalem, bringing sick folks, and them which were vexed with unclean spirits: and they were healed every one." 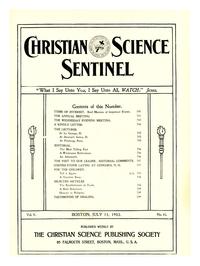